One-pot beef taco salsa black bean spaghetti.....I know I don't usually have such a long, tongue-tied recipe name.  But I have been thinking and searching what is the best name to give to this dish.  I love it.  I am excited about sharing it.  So, that was my final decision.

Anyway....Have you ever heard of or tried black bean spaghetti before?  I know some people will be bothered by its color.  I had black pasta in the past made with squid ink which I love, love it.  So, seeing the black bean spaghetti, I want to try it right away.  I am very comfortable with the color.

What Is Black Bean Spaghetti? 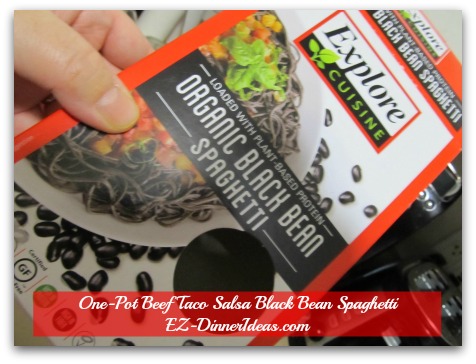 You may still be skeptical about this spaghetti.  So, let me share with you my discoveries:

I was surprised that there was no smell.  I originally anticipated some smell like what whole grain pasta would give out.

I know that this is one of the most important things that most people care about.  It could be a deal breaker to some people.  I must say that the texture of black bean spaghetti is very similar to whole grain long pasta.  If you like that kind of noodles/pasta, you will like this one, too.  Although it is called spaghetti, the thickness is closer to angel hair.

Without any seasoning, it is very blah.  So, you must season it very, very well.  You may end up putting more than usual to give the flavor to this spaghetti.

This is the best part.  I must say that the black bean spaghetti is very filling.  What I love about it is that when I felt so full after having this dinner, I didn't feel like, "omg....I am going to pop."

Instead, I felt like very satisfied and my body just told me, "You had enough."  (It sounds like the black bean spaghetti has some kind of intelligence, right?  But it was how I felt when I was enjoying this recipe.) It was an awesome feeling of being filled.  I can tell you that when I went to bed that night, I felt Super.

One thing I do realize is the cooking direction.  If you follow what it said in the package, you could easily overcook the pasta.  As of right now, the package said to simmer for 6-8 minutes.  I would suggest 4-6 minutes. 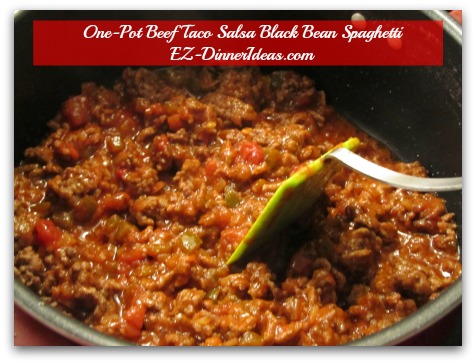 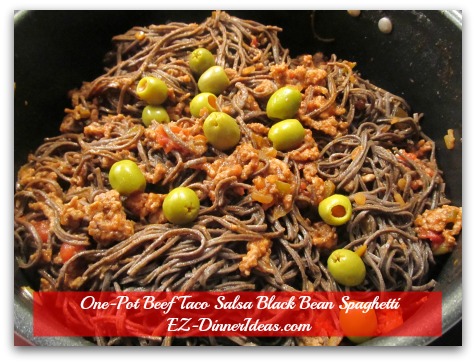 Toss in black bean spaghetti and olives and enjoy 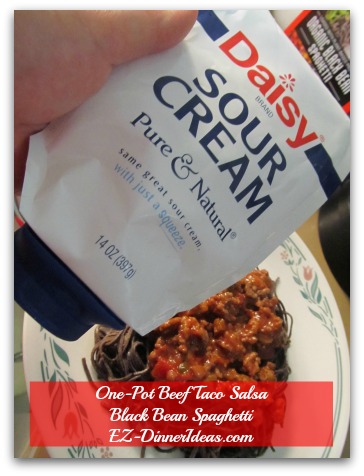 Use squeezable sour cream to make a distorted mummy face